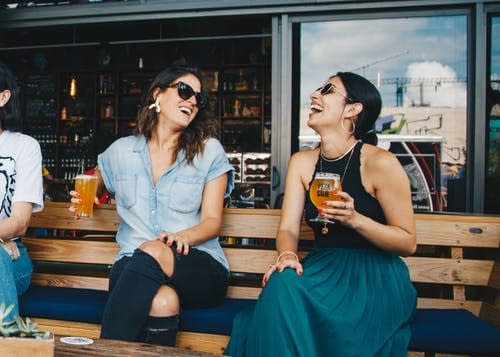 I’ve been keeping to myself for the last couple of years as I had trouble finding suitable employment and have been low on funds. Yesterday, I was invited out by a friend of mine. He’s a gay cis-man I met five years ago when we were both members of a local nudist group for gay and bisexual cis-men. Since coming out, he’s been one of my strongest allies and dearest friends. The bar we went to is a local GSM, dubbed Gay bars here. We went to see a famed singer, Mia Dorr, and he wanted to introduce me to his friends.

As it often happens when going out on the town, I tend to stand out. I’m a trans woman who doesn’t pass. I’ve come to believe that not passing or passing is just not the point. I have tremendous self-acceptance and love for myself and other trans people. I realize that not all of us will pass. I don’t see that as a bad thing anymore. I’ve met many other trans people who believe it as well.

The bar was full of people. My best guess is that many were cisgender and many were heterosexual. I wasn’t surprised. The phenomenon of cis/het people in GSM entertainment venues is not new or bizarre. Yet, I’ve always found it slightly unsettling.

Having drinks, meeting people, joking around, cis people get to wondering about me. Eventually, I’m asked “Tell me your story” in some form or another. What I believe they are asking is for me to share my transgender experience. It often feels more like an invasion of my privacy. I’ve created more and some unique responses to dissolve those situations.

-explain to them I was an award winning child BMX rider.

-tell them my grandparents owned and operated several restaurants where I learned to cook, clean, and make my own soft-serve ice cream cones by the time I was in second grade.

-tell them I moved around the state a lot as kid, experiencing country, suburban, and inner city life.

I’ve found deflecting may not end their curiosity, but it fills up the time they have to keep probing me. I’ve found many cisgender people will just keep asking; however, I don’t think I owe them any explanation of my gender.

I enjoy talking with other trans people because our influence is immersed within every culture in the world. At the present, our numbers are so spread out, especially around here that I can reasonably expect to be the only one around when I go out.

How other people feel about transphobia can depend greatly on the culture where they live and grew up in. Here, in Midwestern America, I don’t think that picking apart my appearance, my voice, my hair, my motives, or my choice in lovers is acceptable behavior. I wish it didn’t sting so much emotionally.

Despite the locals being less than desirable to be around, I’m still going to make an effort to get out. I only wish that I had a magic wand that would help those who choose to confront me to be less rude and harmful!

Thank you. It gives me hope for my future.

Thanks so much for the article, you’re really brave and living honestly, that’s all that really counts, living your truth

Thanks, Catherine! I agree. I wouldn’t want to package up my joy for being me into some vacummed space bag and file it away back in my closet. I’m too busy learning to love myself.

Is that a typical transgender journey?