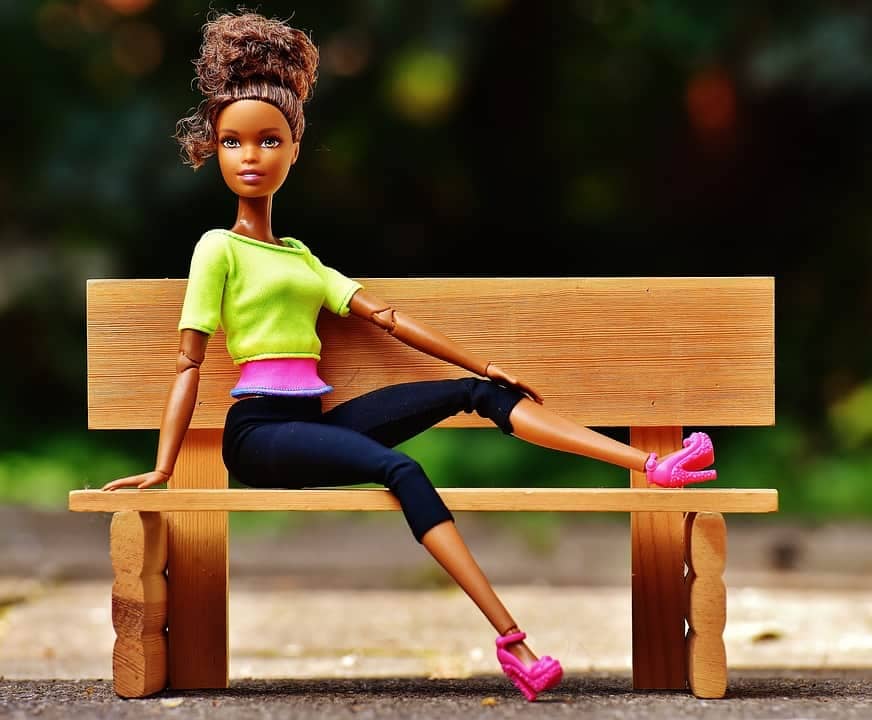 This movie is based on a true story. Marwen is a fictitious town in Belgium. The setting is WWII and the war between the Axis and Allies is in full swing. Captain Hogie is the main character and seeming hero of the story. The movie opens and shows Captain Hogie going down in his fighter plane with a flaming wing. As he crash-lands in a marsh he gets out and suddenly you realize he’s a 12” Action Figure. Steve Carell plays Captain Hogie with a masculine bravado we often think of an American Military Officer. Since his boots were burned in the crash, he finds some new shoes. A pair of very smart stilettos.

I’m very impressed with the way this story is told! I’m a fan of stop animation, however, I think this may have been done with computerized 3-D animation. The 12” doll sequences revolve around the adventures of Captain Hogie and his squad of female soldiers. The female doll soldiers mostly reflect his real female friends. He brings his squad with him most everywhere he goes in town. In his real life these women are his co-workers, neighbors, fellow vets and his caregiver. He works at a local bar and grill and as an artist at his home. In his yard he built the town of Marwen where he takes photographs as he plays out different stories that loosely reflect his real life.

The story of Hogie is one that touched my heart. Hogie is a man who enjoys wearing women’s shoes. He has 287 pair of them in his closet. Often while at home, and sometimes while in town, one might see Hogie wearing some strappy sandals or 6” stilettos but otherwise dressed in men’s fashions. The movie revolves around the reason Hogie has P.T.S.D. and his therapeutic work with photographing 12” dolls. There was a time that he drew beautiful drawings of WWII G.I.’s. He was attacked one night in the bar he works in while he was having some drinks there. A gang of men, at least one of them a Neo-Nazi, harassed him about wearing women’s shoes. Hogie was beat to a pulp within an inch of his life. The film centers on the ramifications of this beating and ends with the court hearing of this hate crime.

What stood out to me was Hogie’s bravery. This hate crime didn’t stop him from being himself. He continued to wear women’s shoes despite what happened. The shoes reminded him of the essence of women. What does this matter to him, you might ask? Hogie believes that women are the saviors of the world. Truly, in his story, we see that the women in his life truly have his back. It has so much heart and is a must see!       5/5 stars

Thank you, Dasia! I’ve noticed this movie in Netflix a few times and kept skipping over it. Now I want to see it! Gonna pop some “Skinny Girl” popcorn and pour a glass of wine for movie night this evening! 🤗🥰
Xoxo,
Nikki

So want to see that movie. Thank you for the review!

Bravo Dasia. I originally passed on this movie but will have to watch it now. Thank you.

Right on, Meeka, I’m glad you’re gonna check it out. This movie really just hooked me in, tugged at my heartstrings and had me watch the entire extras section and rewatch parts of it immediately. Most movies don’t enrapture me as this one did. I hope you enjoy it!

Hi Dasia, I wanted to see this when it came out in the theaters but forgot about it. Now after reading your article, I have to say that I really, really want to see it! So thanks for reminding me of this film and thanks for reviewing it!

Sweetness, Michelle! I used to make my own stop animation films with a VHS-C camera at the turn of the millennium. This movie inspired me to think of that again. I’ve been thinking of a Fringe show for next year. Might be fun to have some puppets involved. What Hogie does with these 12″ Action Heroes and Dolls, the facial detailing, the miniatures, the posing…it’s breath taking!

Who are the smokers here?

what should I use for my pronouns?