Transgender Friendly services for special events. Wedding Planners, DJs and more. Welcoming to the transgender community for your special occasion.

Website
Phone: (503)722-9400
Abernethy Center is Portland’s premier full-service wedding and event venue. With two stunning gardens, an elegant ballroom, and the classic Abernethy Chapel we offer beautiful and distinct settings for your special occasion. Since our inception in 2001, we have dedicated ourselves to mastering the art of hospitality. We combine award winning catering with exceptional customer service to create extraordinary memories for you and your guests. Open Listing

Website
Phone: (918)859-8786
Email: [email protected]
At Aila’s Catering, we provide superior quality ingredients and stunning displays with each and every menu created for events ranging from weddings and corporate events to family gatherings or intimate, private home dinners. Are you looking for someone to provide the food at your next event? Large or small, we do it all! Get in touch to start planning the perfect meal for a business lunch, wedding, cocktail reception, and more. In today’s culture of unhealthy fast food, eating well can be difficult. From weekday lunches to special occasions, and everything in between – we’ll help you set up a Open Listing 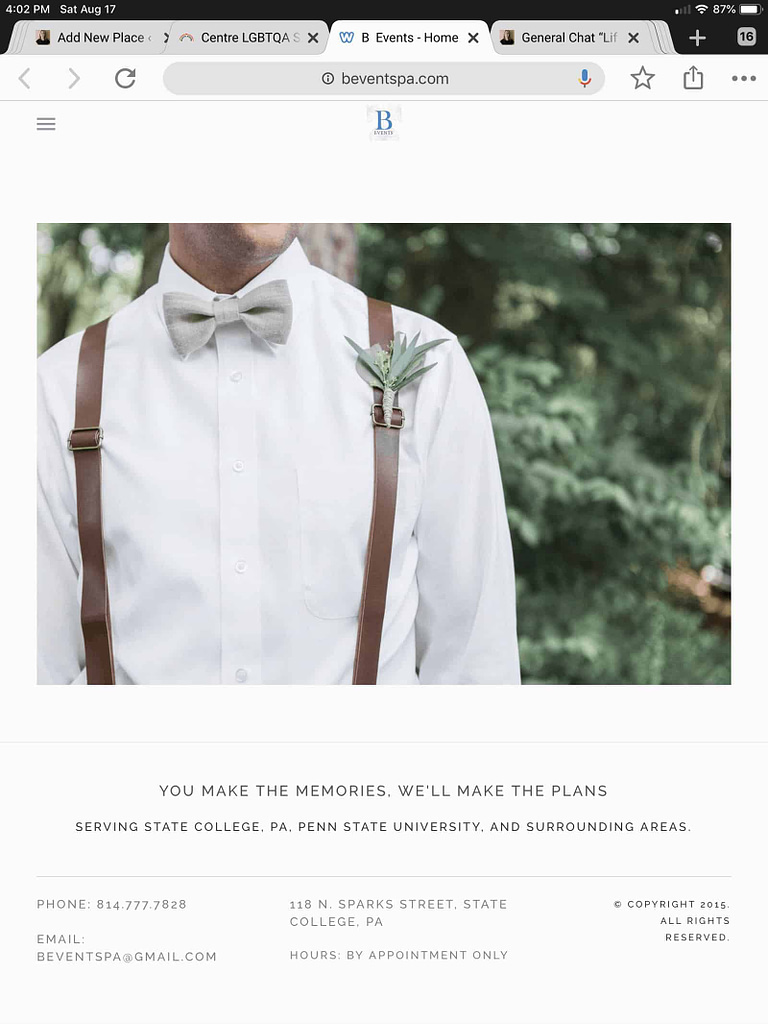 Website
Phone: (814)777-7828
Email: [email protected]
Thanks for stopping by. We’re so happy you’re here! Our goal – besides having a great time and creating lifelong friendships – is to customize the planning experience for each and every client. We do this by pairing each couple with their perfect-fit vendors, creating a custom design concept that suits their budget and style, and streamlining communication. Cori and Megan plan in tandem, allowing them to build a close relationship with the couple and a deep, broad knowledge of every event. Of course, each planner has her area of specialty … or, if we’re honest, has a part of Open Listing 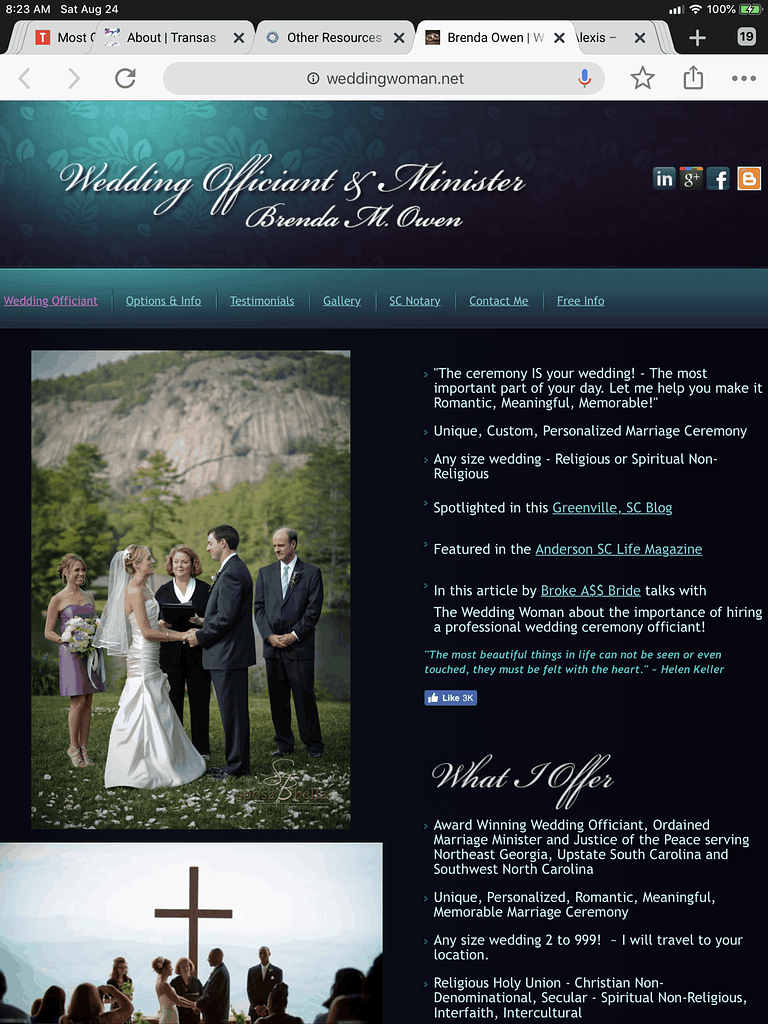 Website
Phone: 864-365-6022
I am a wedding professional.  I have been writing and presiding over wedding ceremonies since 2006.  I am experienced as a public speaker and wedding officiant, having solemnized the marriages of over 2000 couples!   I am passionate about what I do and dedicated to giving you the very best;  my standards call for nothing less than excellent.  I will work with you to create your personalized ceremony based on your personalities and what you tell me you want…whether you want a big, dream wedding, an alternative to a ‘court-house-steps quickie’ or an intimate, meaningful elopement for “just the two of you”. Of all Open Listing

Website
Phone: (781)400-1617
Nick Teich, PhD, LCSW, founded Camp Aranu’tiq in 2009 as a nonprofit organization. It began as a weeklong program in 2010 at a rented site with 40 campers, and has grown to serve over 650 campers each summer at its very own home in New Hampshire. Camp Aranu’tiq was the first-ever summer camp established for transgender and non-binary/gender-nonconforming youth. Besides being a member of the trans community and a social worker, founder and CEO Nick Teich spent 13 years as a camper, CIT, counselor, and camp administrator prior to starting Aranu’tiq in 2009. Nick works full-time, year-round on Camp Aranu’tiq/Harbor Open Listing 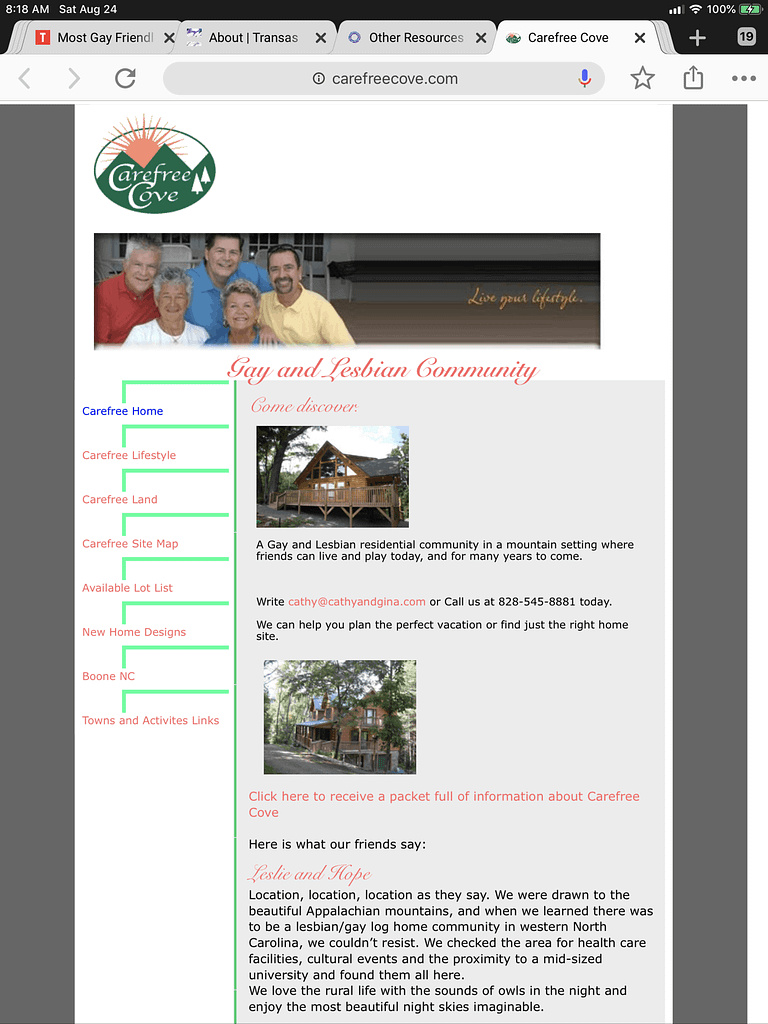 Website
Phone: (828)545-8881
Email: [email protected]
Developed in 2000 as an LGBT community, Carefree Cove has changed with the times and while most residents are LGBT, we have become more inclusive. Set in an idyllic forest in the Blue Ridge Mountains of northwestern North Carolina, the Cove is located near Tennessee and Virginia. The area, known as the High Country, is a magnet for people from the eastern third of the country who enjoy winter sports, three seasons of water sports, year-round hiking, and a vibrant arts community. Open Listing

Website
Phone: (213)628-2772
Email: [email protected]ctgla.org
At Center Theatre Group and under the leadership of Managing Director/CEO Meghan Pressman, we believe theatre creates an extraordinary connection between artists and audiences that only starts on the stage. Theatre creates the energy that feeds a city, a culture, and a society. Theatre reflects the community it serves. As one of the nation’s most influential nonprofit theatre companies, we proudly continue our more than 50-year tradition of using the art of theatre to broaden horizons and illuminate new perspectives. We entertain. We create. We engage. We inspire. We put theatre at the center of it all. Open Listing 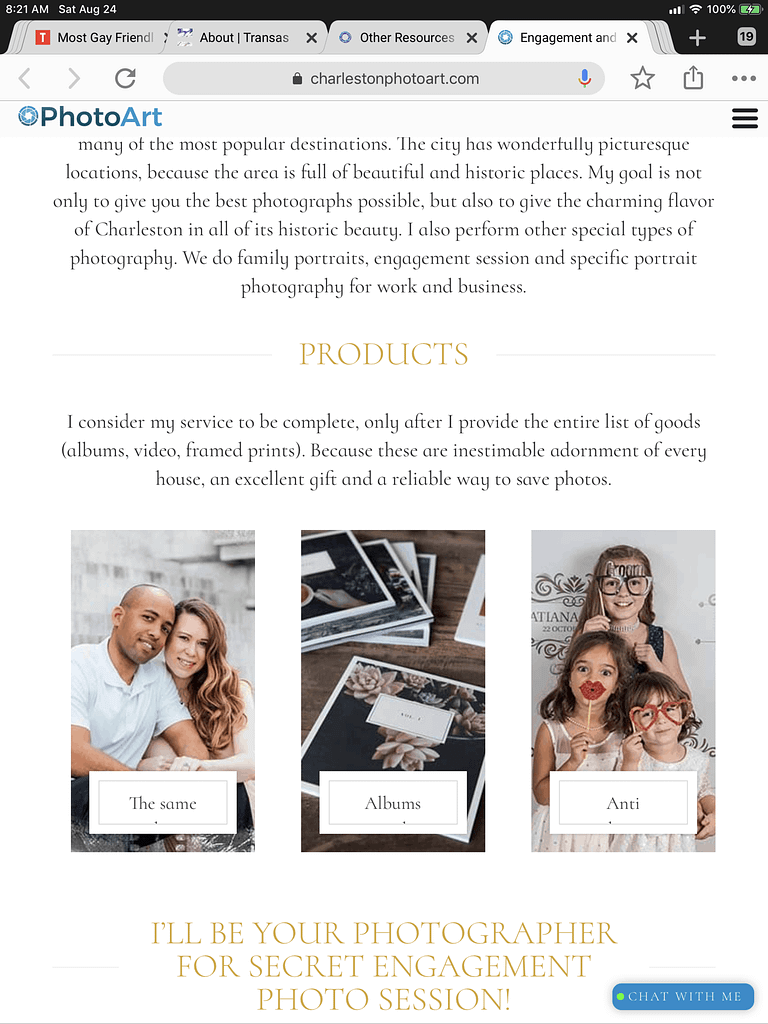 Website
Phone: (843)819-9705
Email: [email protected]
I am an experienced professional wedding photographer and my team consists of dedicated experts who know how to create the lasting memories of your Big Day with considerate individual approaches and the least hassle. My mission is to fill every wedding picture with personal emotions and great vibes. So, working with me and my team will provide you with indisputable advantages and incontestable bonuses. You will receive: • thorough guidance, scheduling advice, and professional tips; • help with choosing the best picturesque places, environments, and backgrounds; • assistance with special preparations and makeup; • the top-of-the-line mastery, reliability, and punctuality; Open Listing

Website
Phone: 814 237 2789
Daniel Vaughn Designs focuses on weddings and events of all sizes. Drawing from the experience of top floral & event designers has earned Daniel Vaughn Designs recognition for its creativity, technical skills & reliability. Using only the freshest, premium quality flowers to create breathtaking centerpieces and lovely bouquets, combined with a beautiful selection specialty linens and one of the regions largest selection of distinctive containers and props for room enhancement, the staff is able to design the perfect ambiance for your wedding or party. Daniel Vaughn Designs also offers fabulous fabric draping, room decor, candles, and accessories. The process of Open Listing 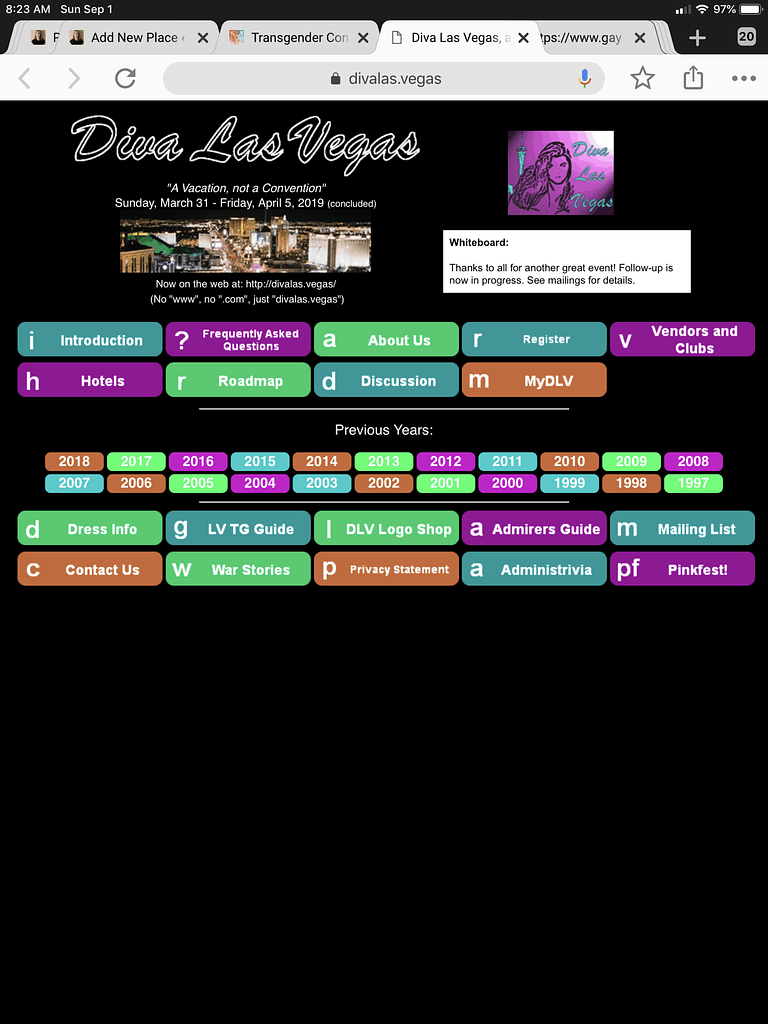 Website
Phone: (xxx)xxx-xxxx
Email: [email protected]
Diva Las Vegas is an annual social event for the members of the greater transgender community, including partners, friends, and guests. As the name implies, this event happens in Las Vegas, Nevada, USA. Diva Las Vegas (DLV) is often called “a vacation, not a convention” as our event is not based upon the model which is used for most of the other large TG community events in the US. The activities which occur at our annual event are mostly social, cultural, participatory and recreational in nature. Open Listing

How important is 'passing' to you?

Find awesome listings near you!