The Right Note of Confidence 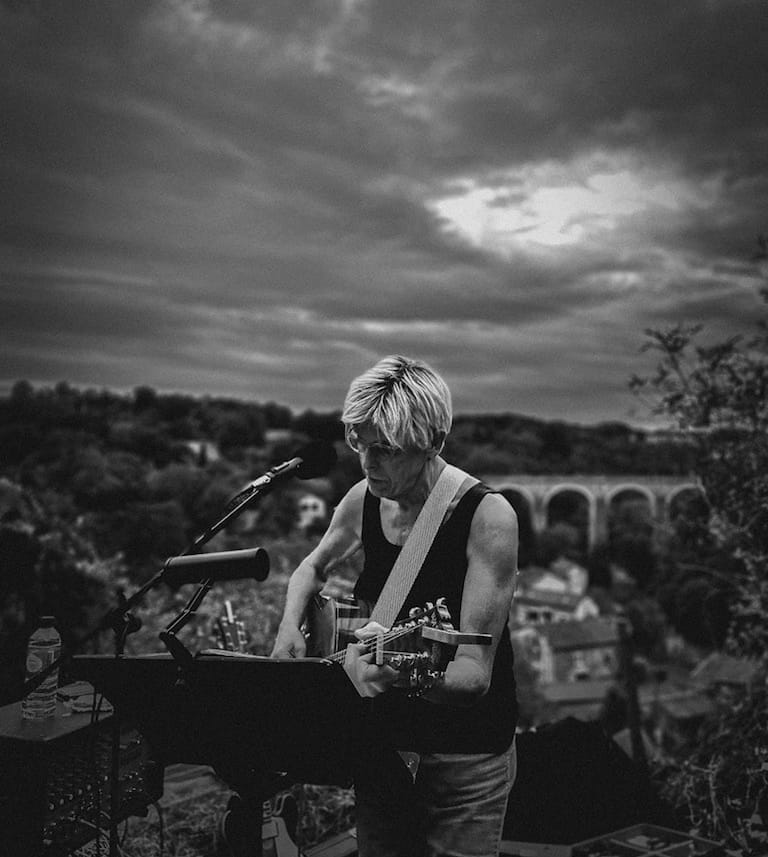 Recently, I played my second solo concert of 2022 after about six years of no solo performances, and five years since singing and playing bass with a blues and rock band.

A few months ago, I encountered a man playing a didgeridoo outside a local supermarket on two occasions. The first time I gave him a few coins, the second time it was a sweltering day, and I offered to get him a cold drink while shopping. Presenting him with the drink on my return sparked off a conversation. He invited me to go to a nearby open mic night, something that is known here as a “Bœuf,” taking place that Friday evening. I quite liked the idea of playing again and decided to go along. What a great decision that turned out to be!

I took my electro-acoustic guitar and some lyrics, as I am not great at memorising them. From a previous visit about a year back, I knew the venue was quite tiny and fairly intimate. However, when I arrived, I discovered it was not being held there at all, but at the rear, in a fairly large barn. To my surprise, inside was a professional PA system with mics, lighting, a drum kit, guitar amps, electric and acoustic guitars, and a bass sitting in place, ready to play. Wow, things were suddenly looking very interesting. I recognised a couple of musicians that I had seen before and asked how the evening worked, and then I did a test on my guitar.

I placed my guitar up front with the rest, got a drink, and walked back outside. Soon after, I heard the twang of an electric guitar as the evening began. Back I went mingling in amongst the others near the front to watch the musicians for a while. I set off outside again and bumped into a couple of friends who had turned up. It\’s always nice at such events to find friends and chat. That was until I heard my name called out from inside asking me if I wanted to play. Back in I went to get my guitar with no idea of what was about to happen.

As I got set with my guitar, I was asked by the musicians who had just played if I wanted them to accompany me, which I declined. As if I really didn’t want or need them!!! My confidence hadn’t resurfaced yet, and off they walked into the audience.

Ending on a high note

The first two songs didn’t start well and fell apart, leaving me feeling somewhat rattled. I quickly explained that I hadn’t played for a few years and was a little nervous. That was responded to by calls of encouragement that touched me deeply. I bent forward and lowered my head, taking a deep breath and telling myself silently inside to stay calm and do what I knew I could do. Suddenly, at that moment, I knew exactly what song I had to play, one of my compositions. A few bars in and it was running well. Within no time at all, the guitarist arrived alongside and accompanied me, followed by a bassist and drummer. Suddenly, I was on a high for the next hour or two. I cannot recall how long I played but know that I played quite a few songs. There was a great response from the audience, who encouraged me to continue playing whenever I stopped to think about what to play next. Until I felt I had taken enough of the evening for myself, and graciously bowed out to heart-warming cheers, whistles, and applause as I walked back into the audience.

I spent the rest of the evening talking with people I had never met before, receiving wonderful comments on my performance, and enjoying the music of others until leaving in the early hours of the morning. What a fabulous night!

It was a great confidence-building evening and one that has stayed with me since. In June, I played at the national music day festival in this town, and later that month at another open mic night at the local theatre during their summer festival.

In August, a local cultural organisation near where I live invited me to stage a solo concert in their garden on the evening of August 21st. It would be my first concert in quite some time, requiring me to put in a lot of practice. During the run-up to the concert, I spent days of intensive practice to get my voice and playing back to an acceptable level again. That proved to be a process of deeply engaging me in my singing and guitar skills once again. It has also stimulated my passion and desire to play more. Perhaps to put a group together again and really have some fun?

The 21st of August arrived. I took my amp, pa, and a couple of guitars along to the gardens. Although a cloudy sky loomed overhead, the music started on time, and I had more fun. I was thrilled with the sound I achieved, and things went well. The audience was around 25-30 people who appreciated my music as I played long into the darkness of the night.

What I didn’t expect after that night was to be asked back to play again so soon! Since the first concert, I purchased a new pedal to enhance my vocals and fill out the sound to add more depth and colour to my performance. It arrived just in time, a couple of days before the event on September 11th. Luckily, after trying it out with some of my songs, I realized it should be a part of my setup for the next concert. It is a vocal harmony pedal that my guitar and mic plug into; I was so impressed by the harmonies it created; it was quite stunning in how it worked.

I returned to the venue on a Sunday evening with an expanded set list, including a reworked version of one of my compositions. The song just worked so well with the new harmony effect that I made it the second song of the night to add impact early on. Oh my, you should have seen some of their faces when I kicked in the effect at the chorus. I really had one of the best nights. A much bigger audience, who were very responsive and supportive, helped it. As suggested prior to the night, I took a hat to pass around at the end. Much to my surprise and delight, many people gave money in appreciation of the evening, so much so that it covered the cost of the new pedal!

This entire process of rediscovery was embedded with an important lesson for me, and one I needed to overcome in whatever way I could find. Since relocating here in late 2017 to live as Sophie, my confidence to go out into the world again to play and sing had disappeared. It had become a self-imposed and almost hidden obstacle I had trouble dealing with. In all other areas of my life, I have lived trouble-free, without feeling embarrassed by anything that I did. I felt confident in who and what I am. But that was simply within the day-to-day life of the ordinary; although I never think of myself as ordinary, quite the opposite.

I believe that the pitch and tone of my voice were at the root of this issue, and why I had lost confidence, especially when it came to the question of singing. While I have never been challenged publicly or privately, for my voice, I was not as confident as I believed. I avoided thinking about playing and singing in public in any capacity.

Early this year, I confronted this issue and played some songs to friends, who were supportive and reassuring, which clearly helped the process. In time, I understood that what I had been doing to myself had trapped me and prevented me from doing something I enjoyed and loved for several years. I could no longer suppress my desire to engage in singing and playing music again. I played my guitar to brush up my skills, not that I am any kind of great musician. I have always loved playing music and found it to be extremely fulfilling on many levels, even therapeutic.

So, it is with a great sense of achievement that I write this piece in recognition of overcoming what I hope may be the last hurdle in being happy and confident in who and what I am now.

Would a trans women want to go through menstruation